Depth Estimation
Goal: Generate an depth values from one or two images. 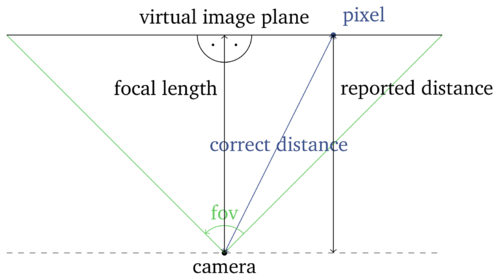 Here reported distance is the z-distance.

For standard (rectilinear) images, people typically use z-depth. This is the depth to the camera projected along the z-axis.

The depth to the camera is called Euclidean depth. You can convert between z-depth and euclidean depth by multiplying or dividing by the cosine of the angle from each pixel to the center of the image.
This angle is calculated by first computing the 2D distance from the pixel to the center of the image and converting this distance to an angle using the known field of view.

For stereo methods, people usually estimate pixel disparity rather than depth.
That is, determining how far a pixel moves along the epipolar line between two images.

Usually, this involves first rectifying an images using RANSAC or similar. Then a cost volume can be built. Then argmin is applied to the cost volume to find the best disparity estimate.

Disparity is related to depth by the following formula: \[disparity = baseline * focal / depth\]

Typically people use cost-volume to estimate depth from a stereo camera setup.