Primarily used for image tasks such as computer vision or image generation, though they can be used anywhere you have a rectangular grid with spatial relationship among your data.

Typically convolutional layers are used in blocks consisting of the following:

Upsampling blocks also have a transposed convolution or a bilinear upsample in the beginning.

Pytorch Convolution Layers
Types of convolutions animations
Here, we will explain 2d convolutions.
Suppose we have the following input image:

and the following 3x3 kernel:

The formula for the output resolution of a convolution is: \(\displaystyle \frac{x-k+2p}{s}+1 \) where:

Typically a \(3 \times 3\) conv layer will have a padding of 1 and stride of 1 to maintain the same size. A stride of \(2\) would halve the resolution.

Typically these days people use small kernels e.g. \(3 \times 3\) or \(4 \times 4\) with many conv layers.
However, historically people used larger kernels (e.g. \(\displaystyle 7 \times 7\)). This leads to more parameters which need to be trained and thus networks cannot be as deep.

Note that in practice, people use multi-channel inputs so the actual kernel will be 3D.
A Conv2D layer with \(C_1\) input channels and \(C_2\) output channels will have \(C_2\) number of \(3 \times 3 \times C_1\) kernels.
However, we still call this Conv2D because the kernel moves in 2D only.
Similarly, a Conv3D layer will typically have multiple 4D kernels.

How much the kernel moves. Typically 1 or 2.

With convolution layers in tensorflow and other libraries you often see these two types of padding:

Other Types of Convolutions 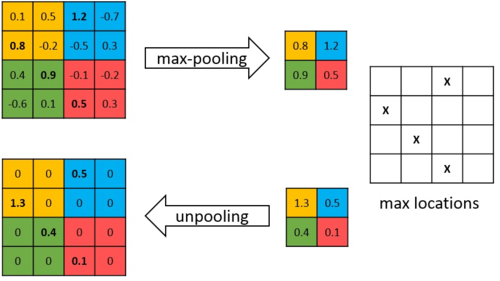 Pooling is one method of reducing and increasing the resolution of your feature maps.
You can also use bilinear upsampling or downsampling.
Typically the stride of pooling is equal to the filter size so a \(\displaystyle 2 \times 2\) pooling will have a stride of \(\displaystyle 2\) and result in an image with half the width and height.

Take the average over a region.
This is equivalent to bilinear downsampling.

Take the max over a region.

During max pooling, remember the indices where you pulled from in switch variables.
Then when unpooling, save the max value into those indices. Other indices get values of 0.

There are many ways to adapt convolutional layers to spherical images.